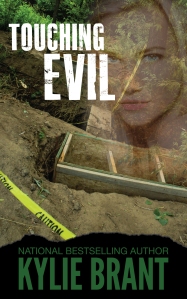 Announcing a new release is a little like sending out a new birth announcement:  a little pride and more than a bit of relief.  Because I treat deadlines as a personal dare (let that deadline get real up close and scary before I actually write!) I’m usually physically and mentally wrecked by the time I get it done.  But on the bright side, unlike childbirth I don’t have an extra ten pounds to lose and night feedings to look forward to.  Point for me 🙂

Touching Evil is book 2 in the Circle of Evil trilogy.  It picks up three days after book one ended and continues the story of forensic profiler Sophia Channing and DCI agent Cam Prescott as they trail the second in a team of killers.  Here’s the back cover copy:

An unmarked grave. Two killers. And one woman who stands in their way… Forensic profiler Dr. Sophia Channing will be the star witness against Mason Vance, a brutal sexual sadist who kidnapped, raped and murdered six women. She can offer unique insight on the psychopath–she’s his only witness that escaped alive. But the killer has other plans for her, even while behind bars. And when she’s marked for assassination, Sophia realizes she’s not finished with the violent psychopath either.

DCI Agent Cam Prescott is providing Sophia protective custody while she continues her work with his team. Vance’s accomplice is still on the loose. And as more bodies show up with the mark of the killers, Cam and Sophia begin to realize the terrifying breadth of the crimes. Their time is running out to catch the second killer. He’s already picked out his next victim. And he’s willing to go through Sophia to get her.

The third and final book in the series, Facing Evil, will be released in May.

And what good is a new release without a giveaway?  One commenter will be selected to win a print copy of Touching Evil, so please enclose your email addy in your comment.

What’s your favorite site from which to order Christmas presents?  Any great deals so far this season?

This entry was posted in Uncategorized. Bookmark the permalink.